"Two Tails on the Trail"

"The Family on the TransAm" 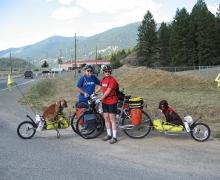 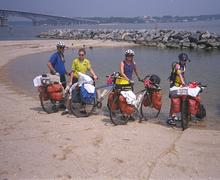 In 2006, we rode the Great Divide route from Rooseville, Montana on the Canadian border to Antelope Wells, New Mexico on the Mexican border.  We were joined by Lander and Afton, our English Cocker Spaniels.  Why take the dogs?  In 1998, we rode the TransAm route with our kids, who were 12 and 15 at the time.  By 2006, "The kids grew up and left home, so we took the dogs."    Lander and Afton love to run with us when we mountain bike.  English Cockers are hunting dogs, so they are bred for endurance.  To get them ready, they trained with us every time we went out.  That got their muscles in shape and also toughened their pads.

The dogs rode in BOB trailers or ran next to them, tied to the right side of the trailer.  We rarely let them run loose, and only when there was no traffic and little chance of bears.  We usually let them run on the uphills and ride going downhill.  They really preferred to run, but they tolerated the trailer.  We seldom could get them to lay down, so they stood in the trailer most of the time.  After awhile, they developed phenomenal skills in balancing in the BOB.

They soon realized that the trailer and our tent at night were our home, and settled into a routine.  They were supposed to sleep by our feet, but it didn't take long for them to realize that it was much more comfortable inside our down sleeping bags.

We definitely set no speed records on the Great Divide, as we were hauling an extra 30 pounds of dog each, plus gear.  But having man's best friend along was definitely worth it.  They went through rain and heat and long days on desolate roads with us.  They became so accustomed to the trailer that we could leave them alone and go into a restaurant or library for an hour and they would just sit there and wait for us.  And we created a stir wherever we went. Everytime we got to a town, people stopped to talk to us.  In fact, we had people stop ahead of us to take our picture as we went by.  I wanted to say, "what do you think we are, buffalo".

During the summer of 1998, the Elenz Family, Jon, Carla, Jodie, age 15, and Todd, age 12, embarked on the trip of a lifetime, riding bicycles 4370 miles from Florence, Oregon to Yorktown, Virginia.  On June 7, 1998, we dipped our rear tires in the Pacific Ocean.  We headed our bikes east, and 85 days later, dipped our front tires in the Atlantic Ocean.  This began as a dream about 20 years earlier for Jon and Carla.  Somehow, the pressures of jobs, family and bills were always in the way.  Jodie and Todd started touring when they were 9 and 6 for yearly vacations with Mom and Dad.  Then, as the kids became teens, the dream became theirs as well.  Suddenly, it became a priority to do this as a family.

Jon and Carla were able to take leaves of absences from their jobs.  The dog and the bills and the house were taken care of by friends and family.  Jodie, as a Senior Girl Scout, decided to incorporate this trip into her Gold Award project.  She purchased a small, mini-notebook computer, and this journal and website became part of her project.  She also raised over $3000 in sponsorships that summer, which she used to put on Bike Safety Month in her community.

During three months on the road, the Elenz family endured freezing rain, snow, hail, burning heat and wind.  We camped in city parks and slept in churches, fire stations and even a monastery.  We were taken in by numerous wonderful people.  We met people on the trail that became our family that summer.  Our home became wherever we pitched our tent.  Our dinner table was wherever we stopped to make a PB&J sandwich or buy a pack of bologna.  For three months, we were known as "the family on the TransAm".  We rode together and slept together, we laughed and sang silly songs and had our own personal jokes.  It was an experience that shaped our lives forever.  Jon and Carla may have the opportunity to ride across the country again, but it won't be the same as the first time with our children.  Jodie and Todd will undoubtedly go on to do bigger and better things, but this will always be a pivotal point in our lives.